Membership Cruise Keelboat Racing Smallboat Racing Junior Camps High School Learn to Sail Club Info Facility
Candidates for 2020 Board of Directors
The below list is a running list of the 2020 BOD Candidate nominations received to date.
Want to run? Submit your nomination packet (desired position, a short bio of previous SMSA activity and service, and a recent photo) to the Nomination Committee (election@smsa.com).
Nominations must be received and confirmed by the Nomination Committee no later than 5pm on October 11th, 2019.
All candidates must be SMSA members in good standing.

I have been a participant in SMSA as crew on several keelboats since I moved to Southern Maryland in 1991. We have been club members for over 15 years and have raced our own boat since 2006. Rebecca and I spend most of our sailing time keelboat racing our Mumm 36 - Cheetah locally and in a handful of non-SMSA bay races every year. We have an ever-evolving crew of sailors who are incrementally joining the club as members themselves. I occasionally crew in offshore events to Bermuda or Newport aboard other people’s boats. Our oldest daughter, Shannon, was the club’s Junior Camp instructor prior to moving to New York where she is the Canandaigua Yacht Club camp director/instructor. Our youngest daughters, Isabelle and Chloe, race with us on Cheetah and are learning dingy sailing and racing at the SMSA Junior Program. Our family enjoys amusement parks, bicycle rides, boogie boarding on the beach, traveling and local attractions.
I was Keelboat Race Chair for at least 2 years and have been the club’s representative to PHRF and CBYRA for several years. I am the Past President of PHRF of the Chesapeake and was the CBYRA Handicap Division Chair for 4 years.
I have been working for AMEWAS (American Electronic Warfare Associates) since 1991 when I left the US Air Force after 11 years of active duty. I am currently the company’s Chief Strategy Officer.
I appreciate the nomination for Commodore. It would be a privilege to serve the membership and I pledge to work with our all-volunteer team to continue the evolution of our many programs to foster membership growth and increase activity and event participation. We have a great little club that is improving in its capabilities and membership-value every year. We are blessed to have so many wonderful friends and families amongst our membership and even more so to have our tireless organizational and activity volunteers. I will provide our volunteers with the necessary resources to be successful in accomplishing the roles, duties and responsibilities for the positions they hold. I will continue the club’s open communications between administrative volunteers and membership so that we are all aware of opportunities and activities in SMSA. I will work closely with past Commodores, elected leadership, board members and program chairs to operate SMSA as efficiently and effectively as possible and keep all members abreast of our progress. 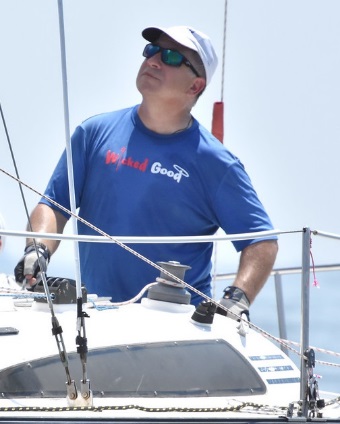 I have been a member of SMSA since 1999. I have raced my keelboat, Wicked Good, with my crew of family and friends in both our informal and formal races and have enjoyed the camaraderie of my fellow SMSA racers. The Screwpile Lighthouse Challenge and the out-of-town boats that join us in the PERF B fleet have been fun competition for the past 20 years.
I have been on the board of the Southern Maryland Sailing Foundation since my son Erik was a high school sailor. I am still active in supporting this non-profit organization supporting youth and community sailing. I am serving my second term as the President.
I have been a small boat dinghy sailor since 2009 and competed in the Buccaneer 18 Nationals hosted by SMSA in 2010 and 2015. I plan to compete in the 50th year event hosted by SMSA in 2020.
I have served 2 years as the SMSA Vice Commodore and if the by-laws are amended, I would like to be considered for a third year. I was SMSA keelboat program co-chair and chair for 4 years and ensured we had race marks prepared and in place for the season and pulled out for the winter, I coordinated the volunteer Race Committees and race scoring.
I enjoyed the adventure and the pace of cruising during my first bareboat charter in the Grenadines. I’d like to encourage some of our experienced SMSA cruisers to share their experiences and lessons learned with those of us who are interested in learning more.
I want SMSA to remain a vibrant and welcoming club with great on the water programs. I am willing and enthusiastic to serve as Vice Commodore.

Robin Witte (and her husband Mark) have been members of SMSA since 2009. Robin has served as the Rear Commodore in 2018-2019 working with the Officers, Directors and Chairs to help make improvements throughout the club. She has participated in the weekly racing programs (Wednesday night, some Thursday night), race committee for the weekly/weekend races, skippering or crewing for the Women’s Series, and as well as helping with special events (Screwpile). In addition to racing, Robin continues to volunteer her time to the Social Committee whether it be planning, setup/cleanup, or working the event. She has contributed to numerous events such as Movie Night, Luau, Buccaneer 18 North Americans, Casino Night, Holiday Decorating (Christmas, 4th of July), Awards Banquet and in 2017 received her TAM certification. Robin (& Mark) are also members of the Fort Worth Boat Club (since 1983). There she worked with the social committee, was the scorekeeper for major club events (JY15 North Americans, J22 World Championship, Major Club Regattas) and was responsible for the first on-the-water score keeping in the early 1990’s. 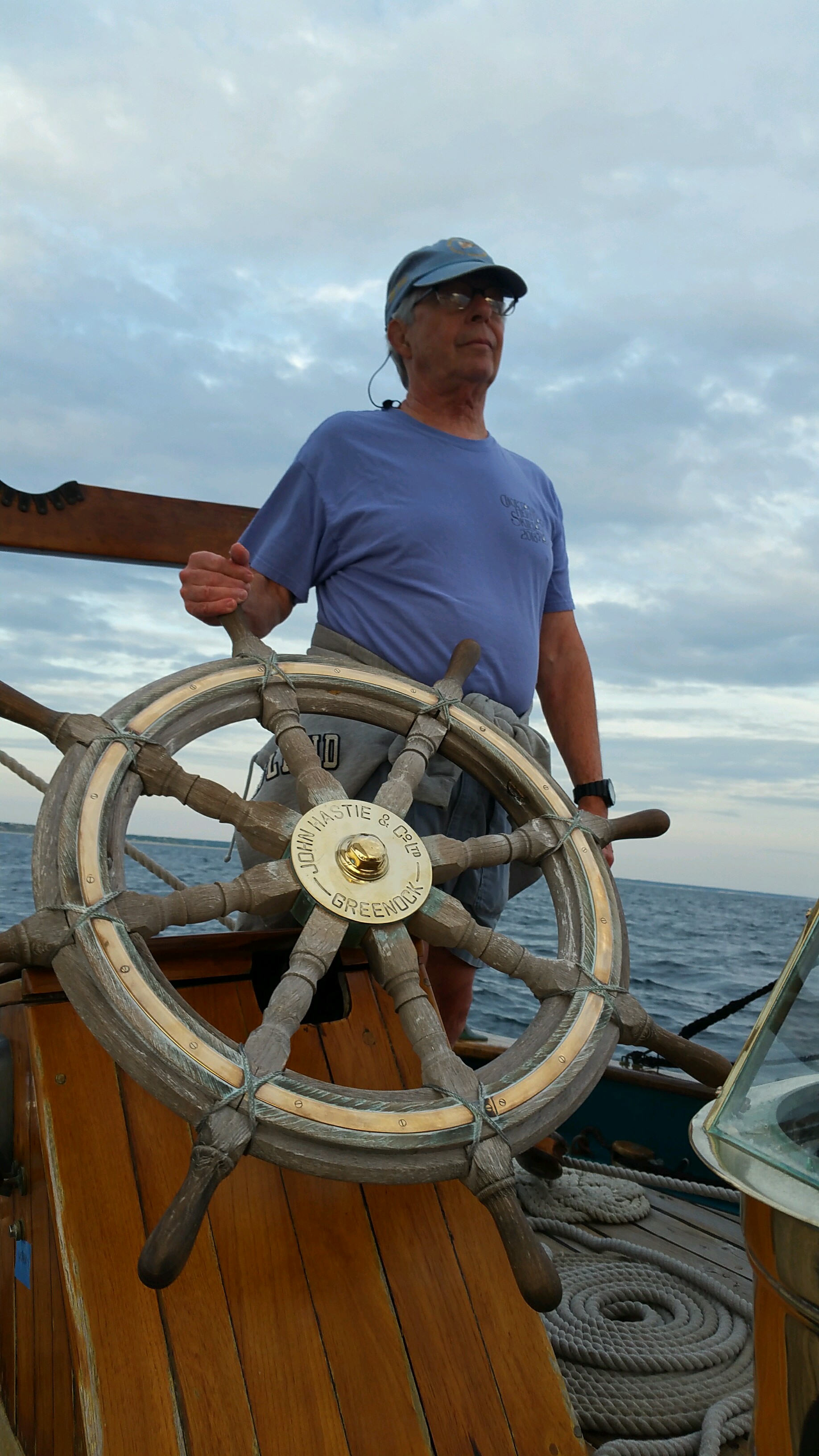 Hi, I am Lowell Martin, the incumbent secretary. I am running for reelection. Marilyn and I have been SMSA members for five years or so. I grew up spending much time on Narragansett Bay in Rhode Island, both sail and power boat. Ended up in the DC metro area in 1971 as a result of my last Navy duty station but didn’t spend much time on the water. When Marilyn and I retired, we moved to southern Maryland in 2011. Saw the adult sailing course on SMSA’s web site and we were hooked. We have a 1981 Catalina 27 -- Blue Boat Home -- which we day sail and race occasionally in Wednesday night non-spin class. Looking forward to another term as secretary if you choose to elect me. Thanks.

I began sailing my 1983 Cal 35, Serenity, out of Zahniser’s in 2002. Since becoming a member of SMSA seven years ago I have been active in the cruise program and participated in many of the activities of the association. For the past two years I have served as Cruise Chair. In addition to leading and coordinating the development of the cruise program activities, I have attended the annual SMSA scheduling and monthly Board of Directors meetings. This has provided me with a broad based knowledge of the many association programs and current and future challenges that would be addressed as a Director.